Almost as soon as we arrived, the plumber had to put a hole in the living room ceiling to repair the shower in youngest daughter’s bathroom.  Much like the music room, this began as a small hole to see what was going on and slowly more and more needed to be opened.  We soon discovered that the radiator in her room also was in need of repair.  We had the option of through the floor or through the ceiling.  Since the ceiling was already opened we went in that way.  Eventually the hole had to extend into the coved ceiling.  We all worried that we would not be able to repair the cove in the plaster work.  Although I seem to have not taken a picture before the work began, I do have this picture of the patch.  It may not look like it,  but this was a rather large corner of the living room ceiling that is missing. 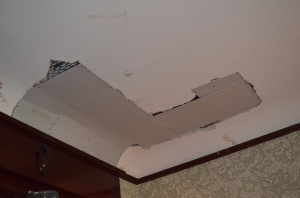 The hole in the living room ceiling

The dust and sometimes water that came out of the hole made me crazy all summer.  It has been an impossible job to eradicate the dust.  Now that we have the hole covered I am hopeful that my daily dusting will be a little easier. 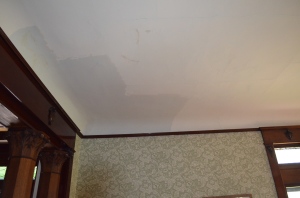 After (but still need paint)

The repair came out great.  We will need to repaint the ceiling (and maybe skim coat the whole thing) but once that is done I don’t think anyone will ever be able to tell this was patched.

One thought on “Finally! A less dusty living room.”